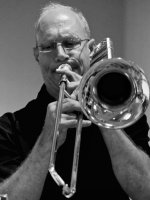 Randy Crow
Randy Crow began playing professionally in 1978, spending a year traveling and performing with Nashville based, Christian recording group "Bridge." After leaving the road life, and marrying his sweetheart (Colleen), he completed his Bachelors degree in Music Education at Kansas State University. He was then hired as the Band Director of Maize Schools and taught in the Maize district for thirty-seven years, retiring in 2018. While teaching at Maize, Mr. Crow’s Concert and Jazz Bands were selected to perform at KMEA In-Service Workshop 12 times. In 2005 he was honored as Middle School - Outstanding Music Educator in the South Central Kansas district, and in 2006 his Concert Band was a featured performing group in the PBS special, In Harmony: Music for Life.

His Jazz Bands have received state-wide and international acclaim, performing as a showcase band at the 2001 IAJE convention in New York City, and for the 2004 Kansas Teacher of the Year awards, as well as garnering numerous honors at Jazz Festivals.

Mr. Crow has performed with several jazz bands, and wind ensembles, and regularly performs with the Delano Jazz Orchestra, and the Senseney Music Community Band. He founded the annual "Get Trombonafide" clinic in the Wichita, KS area, encouraging and inspiring students in the art and enjoyment of trombone playing. Randy has served as an Adjunct professor for Brass Methods at Friends University, and teaches an extensive studio of private students. He has been called on frequently as a brass section coach for groups such as the Kansas Lion's Band, as well as various band camps.